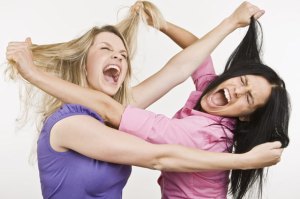 I am not a fighter. (Whether or not I’m a lover is open to interpretation). If I say somebody’s about to “catch these hands” you can bet your last paycheck the most my hands are gonna be doing is typing furiously on a computer keyboard. I know my limits.

Also I tend to avoid situations in which the police might be called. Because job. And law license. (See also: bills.) I’m not about that calling somebody for bail money life. My heart races just thinking about being on the receiving end of said call.  I’ve put people in jail before (see “job”), have been inside of a few, ridden in a law enforcement vehicle or three; but if I die before I ever actually end up in cuffs or behind any bars, I won’t be the slightest bit disappointed.

There are a few instances in which my amygdala shorts out and I forget all of that, though. Those rare occurrences manifest when someone comes for my family.

I’ve watched Daddybeard play soccer and basketball for the entirety of our 12-year marriage. Things on the court and the field often get heated. I’ve accepted this, even though I would be lying if I said I don’t still feel my blood pressure rise when an opposing player looks a little too menacingly at my baby-daddy. Still, I’ve accepted that what happens on the court, happens on the court. My job as his legally-bound cheerleader is to encourage the team from the sidelines and make sure he’s adequately hydrated. I’m not playing (I barely understand what’s happening half the time) so I don’t chastise the refs or the other team.

A certain woman at Daddybeard’s last basketball game hadn’t gotten this memo, apparently. We’ll call her Veruca Salt. Veruca’s man was playing for the opposing team, which had been racking up unchecked flagrant fouls the entire game. She’d spent most of the game spouting off at my husband’s teammates. I hadn’t really noticed because she wasn’t sitting near me and I had spent the majority of my time there trying to figure out if we were the home team or the away team. At some point though, Daddybeard got fouled, the ref didn’t call it, and when Daddybeard challenged him on it, he rewarded my husband with two technicals.

Daddybeard can be hot-headed and he owns that, so of course when Veruca expressed her enthusiastic approval for him being ejected from the game, he let it be known that her enthusiasm wasn’t appreciated. In response, she mouthed off at him. Could I have remained silent and let her words hang in the air? Probably. Could I have gone over to Daddybeard and attempted to soothe his frayed nerves? That would have been the smart, Christian thing to do. Did I do any of that? Nope.

A bunch of heads whipped around and some hands flew out to grab my arms and legs, and I realized the banshee was me. And I couldn’t shut up.

“I see you!” I yelled at her over and over again. This woman was easily twice my size and she looked like she wanted (and could handle) whatever I was offering. And I wasn’t the slightest bit afraid. Even long after half my husband’s team had managed to calm me down enough to get me to stop telling her loudly about my ocular abilities, I prayed she would come confront me after the game. I was a Yorkie yipping at a Pit Bull, but I didn’t care. I was so angry, I felt that if I went down, a piece of her ear was coming with me.

Now what would possess this 5’1” former-clarinet-player to think her 5’10” former football-playing, current soccer- and basketball-playing, hulk of a man needed her protection? I know there were some quick internal calculations involving the fact that he’s a man, Veruca’s a woman, someone needed to let her know she was acting outside the bounds of recreational-basketball-spectator etiquette, and that someone couldn’t be him. The absolute furor with which I dispatched this duty I can only attribute to some sort of grizzly-bear instinct reserved for threats to those I love.

It goes without saying that the same level of protectiveness extends to my children as well as other members of my family. I don’t play when it comes to my flesh and blood.

In fact, as I think about the last few months, that instinct has manifested itself even for those not related to me by blood. As I mentioned before, I can usually be found typing furiously about something, and that thing lately has been some kind of social justice crisis. This grizzly-bear instinct seems to be infecting a lot of us. I think a lot of American people feel like those for whom they share a sort of kinship are under threat, and that is why the political discourse leading up to the election has been so strident.

What is at stake, however, cannot be settled on the sidelines of a basketball court. Last week, cooler heads prevailed with no punches thrown and no blood shed. I will likely never see Veruca Salt again (and if I do, I will mightily resist the urge to be petty and say something to the effect of “After all that noise you kept talking last time, your boo’s team still lost. Maybe you should try silence this time.”) But this country still has to run after November 8. Regardless of who our elected officials are going into 2017, we’ve all either been at the giving end or the receiving end of a vicious battle cry, and there are some wounds that are going to take time to heal. If nothing else, my prayer is that as the scabs fall off, and the scars form and fade, we’ll realize that there was a better way to do this.

If nothing else, I hope what we learn from 2016 is that dismantling our country in defense of those we love is not the move for 2020.

One thought on “Technicals, Pt. 1”

Welcome to our house

Sit down, stay a while.